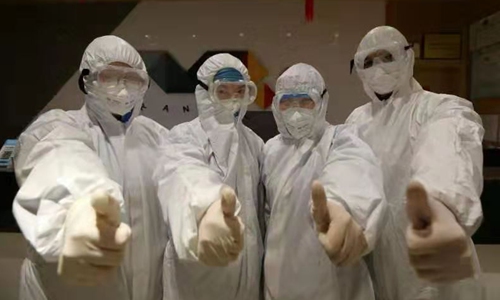 China is fighting a public health battle with responsibility, patriotism and determination. It hasn't been easy, as the novel coronavirus, or 2019-nCoV, differs from previously known coronaviruses. Chinese health authorities were the first to post the full genome of the virus in relevant data banks. Priorities have been given to take care of patients and provide them with appropriate medicines, limit the person-to-person transmission and develop an efficient vaccine.

Several countries have offered humanitarian assistance to China. Their support is important as friendship matters more in difficult times. "A friend in need is a friend indeed," Foreign Ministry Spokesperson Hua Chunying said. While this help has been acknowledged by Beijing, signs of racism and xenophobia against Chinese citizens have appeared around the world. The public health problem that erupted in the city of Wuhan has led to some unacceptable stereotypes that associate all Asian people as dangerous carriers of the virus who need to be quarantined. The Asian community in France felt the need to defend itself and responded with hashtag #JeNeSuisPasUnVirus (I am not a virus).

The 2019-nCoV has caused anti-China sentiment and discrimination of Asians far worse than other diseases. This is not only related to the virus, but stems from several world challenges. Desperate refugees who have been displaced by war, for example, are no longer welcome in many member-states of the EU, which have built fences and seen the rise of  far-right parties. Even more worrying is that the problem is not necessarily an act of malice but has become a trend embraced by the majority.

Reporting on the 2019-nCoV in the international media deserves special attention. Although exceptions exist, the general tendency has been to criticize the Chinese government. The lack of government transparency is a recurrent accusation in the discourse. But US President Donald Trump in a tweet thanked Chinese President Xi Jinping for his attempts to alleviate the crisis and for transparency in the government's actions.

The Western media seem more interested in publishing stories that appeal to their readers rather than conduct thorough research on the matter. Unwarranted panic is the natural result. Serious scientists and virologists are not always able to provide straightforward  answers to key questions because their research and testing is ongoing. Most media tend to interview commentators or use quotes from commentators who spread fear. Rarely do we see stories about recovered patients released from Chinese hospitals in the Western media. That would be a positive story but does perhaps not fit their agenda.

A visit to the World Health Organization's website is sufficient for ordinary citizens to collect practical information about the virus and access material that does not blame China. Reports are detailed but time-consuming to read.

The World Health Organization needs to improve its communication strategy in order to provide  people with messages that are easy to digest. The impact of commercial - if not sensationalized - media reports might be diminished.

This doesn't mean, mistakes haven't been made or the outbreak of 2019-nCoV is now under control or China shouldn't learn important lessons in order to enrich its research on natural sciences and enhance the diagnosis skills of its biologists. But right now nothing is more important than mitigation.

And in this battle China should not be alone. We are all Chinese.

The author is a lecturer at the European Institute in Nice, France. opinion@globaltimes.com.cn